So basically when I was doing my HND we had a brief to create a website for ourselves, overall I wasn’t happy with this at all so I have taken it upon myself to create myself a more professional site, in which possible clients etc. can contact me on and look into myself abit more.

I will be updating this site all the time and it isn’t 100% yet, I have a lot more planned.

Any questions or know how contact me on either the new site or via here!

So after doing some research I went out and took some initial photo’s, the weather conditions weren’t good and the photo’s suffered but I can still see some potential for where I have taken these photo’s, I’m still going to have a play around editing the some of the photo’s but I really want to capture some better ones, so what I’ll have to do is to go to some better locations and experiment with the cameras setting and the angles when I am taking my photo’s, Even though it’s a very bland winter my teacher showed me that I could still take some decent photo’s and that I can edit them in Photoshop to adjust the colours and tones to make them more appealing and interesting.

I took these photo’s at a local lake called “BarnEnd” and to be honest there not the best, but there a start.

This is the original photo that I took and It’s probably the best one in the set and this is because of the bright green moss, I didn’t want to edit a lot on this I just wanted to have a look at the shadows and the depth of the greens.

I was playing around with the colour levels and this is the outcome the moss has turned a deep vibrant purple colour and this I could say has been influenced by the alternative forests research I did earlier in this project, playing around has given me an insight into how the photographer has keeper the natural surrounding colours but changed the bright dominating colours around. Photo’s like this could be really interesting because there different so I need to keep this in mind for my 4 page spread.

I found It quite hard to emphasis the green correctly, It kept going either slightly green or really green, but I adjusted it using the exposure options and the colouring options this these all allowed me to adjust each aspect slightly to get them right.

It’s all good editing photo’s but for my final set of photo’s that would be going in the magazine I will need to write down the precise amounts because some photo’s can’t be darker and brighter than others they all need to be uniform and look like the haven’t been edited.

Thinking inside the box is good but sometimes thinking out of the box is more eye-catching and appealing to an audience because it is different and unique, I have messed around with the colours and the effects on photo’s that I have previously taken in Photoshop but this article on “The Daily Mail” really got me thinking on the colours and the angles that I can take my own photo’s this time around.

I have decided to just copy and paste the information off of “The Daily Mail” simply because there was no point in me rewriting the text on there because it is perfect the way it is, this could also help me in writing my own text for my 4 page spread.

Sometimes a good camera coupled with artistic flair is enough to turn an ordinary landscape into a magnificent candy-colored wonderland.
French photographer David Keochkerian has been working in the medium of infrared photography, creating eye-popping vistas of super-saturated colors reminiscent of some of the finest Van Gogh paintings. A series of pictures shot with a Nikon D700 camera capturing scenic areas around Keochkerian’s hometown of Amiens, Belle ile en Mer, Corbie and Camon overwhelm the sight of the viewers with surreal hues straight out of Dr. Seuss books.
According to experts, in order to create the vision-warping saturated effects in his pictures, the 35-year-old French artist relies on a variety of techniques like long exposure, manual blending and infrared photography, to magnificent ends.

In infrared photography, a filter is used on the camera to block all light except infrared waves, giving the image a wonderland quality, not unlike the vision of Oz in the beloved Hollywood classic, according to the site SHFT. In Keochkerian’s images depicting rivers, woods and picturesque spots in the French countryside, the natural greens are automatically transformed into bizarre-looking canary yellows and golds, electric blues, bubblegum pinks and ghostly whites.

The breathtaking images of nature seemingly inspired by the great 19th century French expressionists sweep aside traditional notions of what a landscape should look like in an explosion of psychedelic colors.

Creative approach: The French photographer employed a technique in which a filter is used on the camera to block all light except infrared waves

Riot of colors: Keochkerian’s vibrant works appear to be inspired by the great French expressionists of the 19th century, who also set aside per-concivied notions of what a landscape should look like

Ghostly: While some landscapes explode with alien-looking colors seen rarely outside of Dr. Seuss illustrations, others appear stark white and eery

Picturesque vistas: Keochkerian has been working his magic on scenic landscapes in the French countryside along the river Somme

Alternative view: Keochkerian’s images fill the eye of the beholder with clashing colors that go against traditional notions of landscape photography

Stunning beauty: This candy-colored confection of a landscape captured in Amines shows trees and bushes bathed in pink, with a kayaker in a blue boat in the river

Glorious nature: This photograph of a landscape in Corbie is dominated by the gold of the trees and the radiant blue of the sky, which are reflected in the river 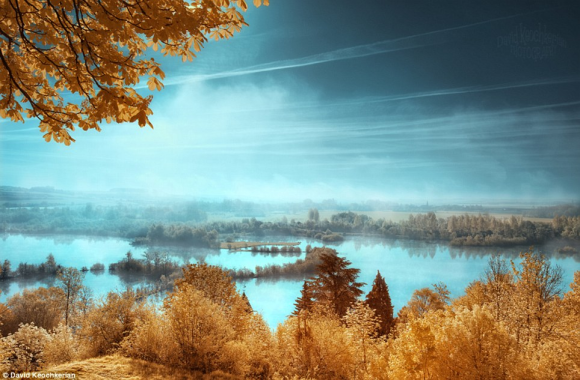 Warped vision: Keochkerian’s infrared spectacles fill the eye with a riot of colors